Calisthenics is one of the hottest words in fitness at the moment.

What are calisthenics? Basically, any movement where the resistance is provided by the weight of your own body is a calisthenics exercise. Pull ups and push ups are classic examples.

Type calisthenics into YouTube and you’ll see a whole bunch of videos of people doing insane movements like planche push ups, muscle ups, human flags and handstand push ups. Most people see that and think “I could never do it”.

Although there are some moves (like two-finger handstands) that you pretty much need to be superhuman to do, the good news is that most calisthenics movements are achievable by most people. It’s just a question of time and effort. And there are tools, like calisthenics resistance bands, which can help you.

Calisthenics resistance bands are used in two ways – either to make the exercise easier so you can get used to it gradually, or to make a movement even more challenging.

What are the best resistance bands for calisthenics?

208cm loop bands, also called pull up bands, are the best kind of resistance bands for calisthenics movements because of the way they can be looped around your body and adapted to different movements. They also come in a broad range of resistance levels from very light to extremely heavy.

Here are 9 ways you can use calisthenics resistance bands to help you get started with bodyweight exercises or to take you to the next level:

The bread and butter of elite fighting forces around the world, pull ups are a legendary upper body strength exercise. They mainly target your lats and biceps, but like all calisthenics, they also fire up a lot of auxiliary muscles, like your abs, upper back and forearms. ‘Strict pull ups’ means going from dead hang – elbows fully locked out – to chin over the bar, which is much harder than starting from elbows slightly bent.

Use a resistance band to first get used to doing strict pull ups. Just attach it to the bar and put your feet into the loop to perform assisted pull ups. Move to a lighter band when the movement starts to get easy, and eventually you can do away with the band altogether. Once you’ve got the hang of basic pull ups, mix it up with some variations – close/wide grip, palms facing in/out, kipping pull ups, butterfly pull ups etc. etc.

Another timeless classic. Everyone knows about push ups. The problem is, if you do them a lot (which you definitely should be doing), they start to get easy. Doing 40 or 50 push ups in one go isn’t that hard if you’ve been doing them regularly for a long time. But you don’t necessarily want to be doing such high reps all the time. So, once you start to get good at doing push ups, try slinging a resistance band around your back to make things harder. 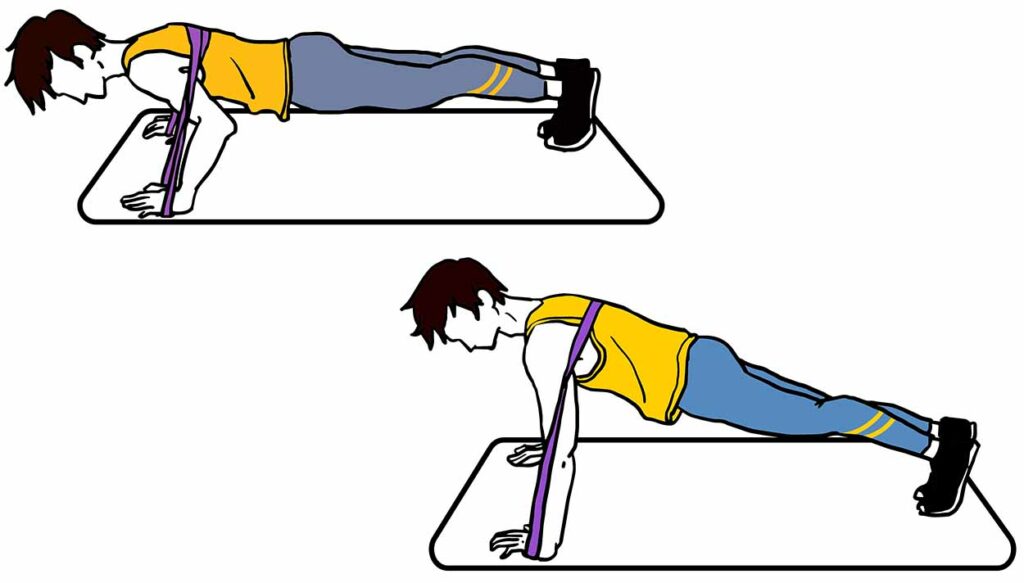 Dips are a great exercise for triceps, shoulders and chest. A narrower grip puts more focus on the triceps and anterior deltoids, while having a wider grip brings your pectoral muscles more into play. You can use calisthenics resistance bands for dips to make them easier until you get used to the movement and can get rid of the band. Just hook them onto the parallel bars or dip station (or you can hold them on with your hands) and perform dips with the band supporting your knees.

OK, so you’re getting good at dips – you don’t need the band to assist you anymore and you can crank out 20 reps no problem. Time to up the difficulty by slinging a resistance loop over your shoulders and holding it onto the bars. Now you’re doing fewer reps and getting a more intense strength workout.

Now we get to an intermediate/advanced level calisthenics move, one which most people reading this will have a lot of trouble with. A front lever involves holding your entire body horizontally and completely straight while holding onto the bar. It requires massive strength in your core and lats.

You can progress into the exercise by starting with your legs bent and tucked in towards your chest, then gradually extending them until you can do it with your body fully straight. But you can also use a calisthenics resistance band, in a similar way to assisted pull ups. Ideally the band should be attached in front of the bar you’re holding, but you can also attach it to the same bar.

A muscle up is simply a pull up followed by a dip. Easy, right? Think again – muscle ups are extremely difficult. The hardest part is generating the power to bring your hips up to the bar from the end of the pull up movement. You can use resistance bands for muscle ups, again in the same way as with assisted pull ups, to give yourself an extra boost until the exercise gets easier.

If you want to look like a hero straight out of a Rocky training montage, start doing one-arm pushups. You might think that as long as you have a big bench press then one-arm pushups will be a piece of cake. Wrong. It takes a different kind of strength to crank out even just one of these bad boys, and it is hard. Make things easy on yourself at first by looping a resistance band around your body and suspending it from above while doing the exercise.

Pull ups are hard enough as it is, who’d be crazy enough to do them one-handed? That’s the beauty of calisthenics – there’s always a more difficult step and more incredible ways to challenge yourself. If you can already do one-handed pull ups, congratulations – you’re one of the elite. If you’re not quite there yet, try fixing a calisthenics resistance band to the bar and holding on to it while doing the exercise. This way it’s easy to vary the weight on your main arm until you’re strong enough to discard the band.

And now we arrive at the daddy, the king of calisthenics exercises – the mighty planche. Amazingly, this is not one of the hardest calisthenics moves (would you believe there is such thing as a one-armed planche??). But anyone who can pull off a perfect planche can rightly claim to be among the crème de la crème of fitness fanatics, an elite gymnast.

There are a whole bunch of different ways to progress into this move, and you can find many step-by-step guides online. Using a pair of parallettes will make this exercise easier. And you can use a resistance band to take some of the weight off and allow your core and shoulders to strengthen gradually. Just attach the band high up and have it looped around your ankles while you hit the position. For an extra challenge, throw in some planche pushups.

If you want to get serious about calisthenics training, you may also be interested in: