Resistance Band Arm Workout: 12 Pull Up Band Exercises You Can Do Anywhere

I want to show you a great resistance band arm workout which you can literally do anywhere.

For this workout you’re going to need a pull up band, which is a 208cm resistance loop made of layered latex. You won’t need anything else.

But why use resistance bands for arm exercises instead of a dumbbell or weights machine?

First, the obvious reason: you can’t keep a set of weights in your bag and take them places, so you’re very limited in when and where you can use them. That’s not good. But a resistance band is so light and portable you can have it with you wherever you go. That is good.

But there’s a more important reason, one which means that, in many ways, strength training with resistance bands is actually more effective for muscle growth than using weights.

Why resistance bands are great for arm workouts

Have you noticed when doing bicep curls with a dumbbell that, after you get halfway through the movement, it suddenly gets a lot easier? That’s because the plane of movement starts to become more horizontal, meaning less resistance from gravity.

The problem with this is that, in most exercises, your muscles are in their strongest position after the half-way point of the movement. So that’s where they should be getting the strongest resistance.

If you want a spectacular set of guns, you can keep doing your free weights (don’t get me wrong, weights are still awesome). But add in these 12 pull up band exercises to vary your workout and I guarantee you will see incredible gains.

Stand on the middle of the band with feet roughly hip-width apart. Hold onto each end of the loop. Bend at the waist, stick your bum out, arch your lower back and keep your head, neck and upper spine in a straight line. Pull the band up, keeping your elbows in. Squeeze your shoulder blades together and hold briefly. Return slowly to start and repeat.

Stand with your feet together on one end of the loop. Grasp the other end and bring it up to your chest level with palms facing up. Maintain a straight posture and look up slightly. Push upwards until your elbows are locked out, then return to the starting position and repeat.

You can stand either with one foot on the band or with both feet together or slightly apart (this varies the resistance). Grasp the other end of the loop with one hand (or both hands together) and perform bicep curls, keeping your elbow(s) immobile and close to your body.

Get into a forward stance with your back leg straight and front leg bent. Your back foot stands on one end of the loop while the other end is looped around the front of your body. Keeping a firm posture, push the band diagonally upwards until your elbows lock out. Switch legs for each set.

Secure one end of the loop to an object and stand straight, holding the other end with some tension in the band, hands apart. Pull on the band, bringing both hands up towards your face, elbows high. Hold in the final position for a second, squeezing your shoulder blades together.

With the band still secured at one end, hold onto the other end with your hand by your waist and tension in the band. Bend forward, keeping your back straight and your elbow close to your side. Push the band backwards until your elbow is locked out, then return slowly to start and repeat.

Sling the loop around your back, holding onto each end. Get into a push up position with the ends of the bands securely under your hands and the band in the middle of your back. Perform push ups as normal but with the added extra resistance from the band.

Hook each end of the band around your feet, and get into a wide forward stance, standing firmly on the band. Lean forward, rest one hand on your knee and grasp the centre of the band with your other hand. Keeping a straight back, pull the band up to the level of your solar plexus, then return and repeat. 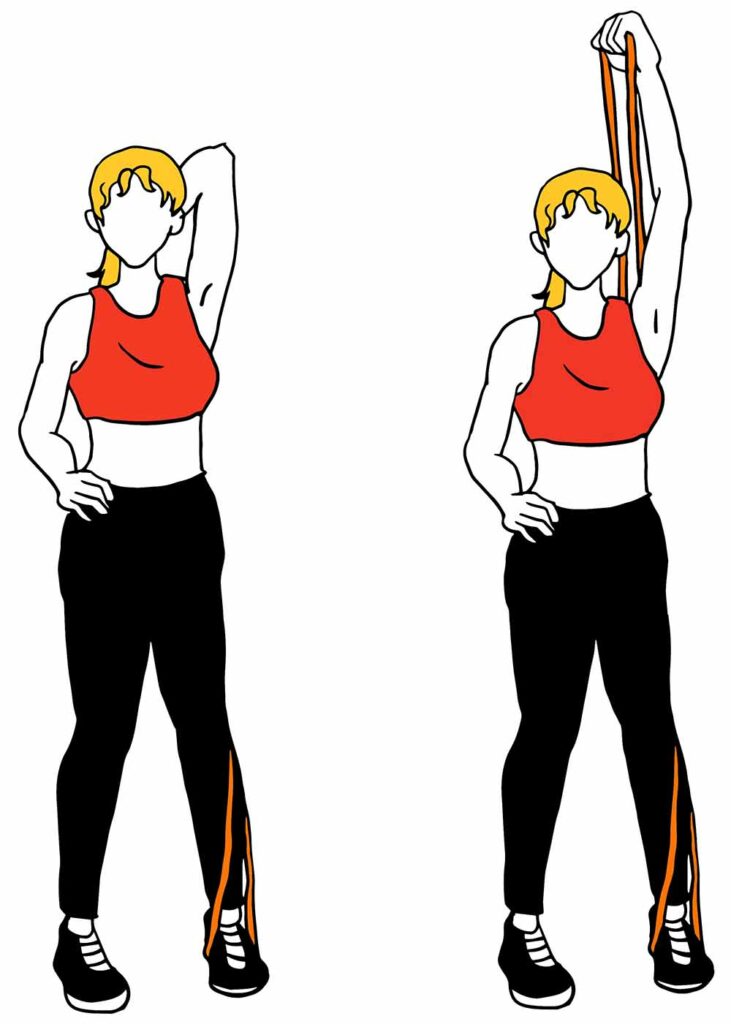 Stand with one foot on one end of the band and grasp the other end behind your head with the band running down behind your back. Keeping your elbow still, push the band up to the ceiling until your elbow locks out, then slowly return to start and repeat.

Secure one end of the band and hold the other end with your hands together and strong tension in the band. Pull the band in to your chest and hold for a second, shoulders back and shoulder blades together. Don’t let your elbows flare out while you do the exercise.

With the band secured at one end, hold the other end and face in the other direction with your hand at chest level and the band taut. Push the band out, keeping your elbow fairly close to your side. Come back to the starting point and repeat.

Stand in one end of the loop with your feet together or slightly apart. Hold the other end in front of you with your hands together. Pull the band upwards until your hands are just in front of your chin and your elbows are pointing upwards. Hold it here for a second then return and repeat.

Read this article to find out about the full benefits of resistance bands, and click here to see our full range.