But I’m sure you’ve still skipped plenty of leg days.

Training legs can seem like a chore – it’s exhausting, and frankly just not as fun as upper body workouts. Often you end up limping around for several days afterwards.

But a strong house doesn’t only need walls and a roof – it also needs a rock-solid foundation. Your legs are your foundation – the stronger they are, the stronger your whole body is.

Your legs contain some of the largest muscles in your body, and training these muscles changes your whole metabolic state. It increases the level of growth-inducing hormones, particularly testosterone. It also increases your resting metabolic rate, which means you will burn more fat even when you’re not moving.

Training your legs is the best way to create a body-wide muscle building environment.

I want to show you a resistance band leg workout which is extremely effective at training all the muscles in your legs and building amazing leg power. Doing leg exercises with bands lets you take advantage of the unique property of elastics, which in many ways makes them more effective, safer and far more convenient than traditional weights.

This leg workout is done with a 208cm resistance loop band. Originally designed as a pull up assist band to help people gradually get used to doing pull ups, it can actually be used to perform thousands of different exercises. It’s one of the most effective and versatile pieces of training equipment you can buy.

You can do these leg exercises with bands of different resistance levels, starting with the red band, which is the easiest. When you get stronger, move up to black, then purple, green and finally the blue band – which is insanely strong.

Stand on one end of the band, feet shoulder width apart, and hold the other end at chest level, palms up. Keeping your lower back slightly arched, squat down until your hamstrings are roughly parallel with the floor. Driving through your heels, return to a standing position.

Loop each end of the band around your feet and stand in a wide stance. Squat down and grasp the band in the middle. Keeping your back slightly arched and your bum sticking out, pull the band up until you’re standing fully upright. It’s very important that your back doesn’t bend forward during this exercise – be sure to keep it slightly arched throughout. Start with a light band to avoid injury.

Stand naturally with one end of the band looped around your front foot and holding the other end in front of you. Step forward into a deep lunge position, simultaneously lifting your arms straight up in front of you and stretching the band upwards. This exercise may feel awkward at first but is great once you’ve got used to coordinating your arms and legs. Be sure to keep your back straight during the movement. 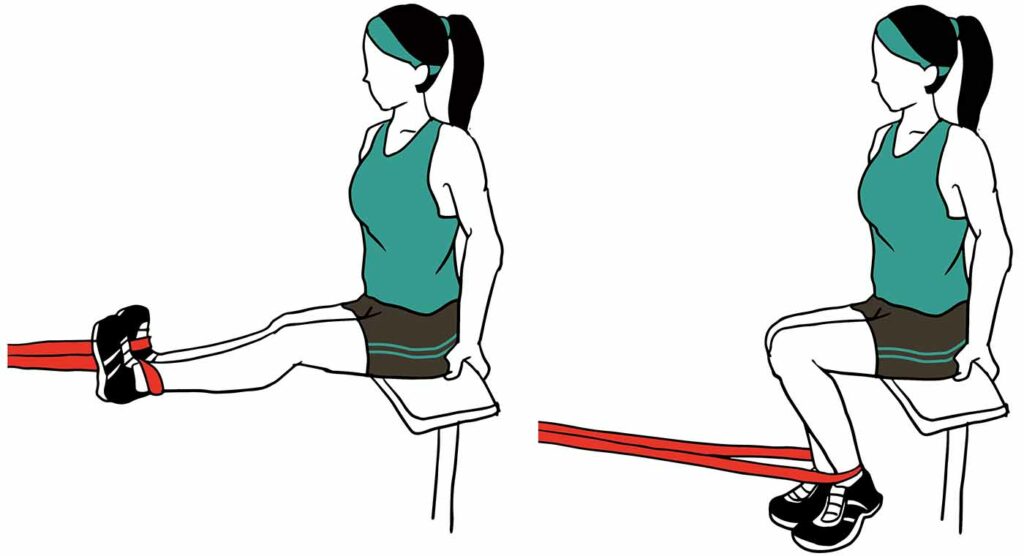 Attach one end of the band low down to a solid object. Sit on a chair with the other end looped around your feet, legs straight and tension in the band. Holding one to the back of the chair, pull your feet back as far as possible, feeling a strong contraction in your hamstrings.

Start in a squat position with the band looped around your feet and held at chest level. Drive up to a standing position, simultaneously pushing upwards until your arms are locked out. Hold it for a moment and then return slowly to the starting position. 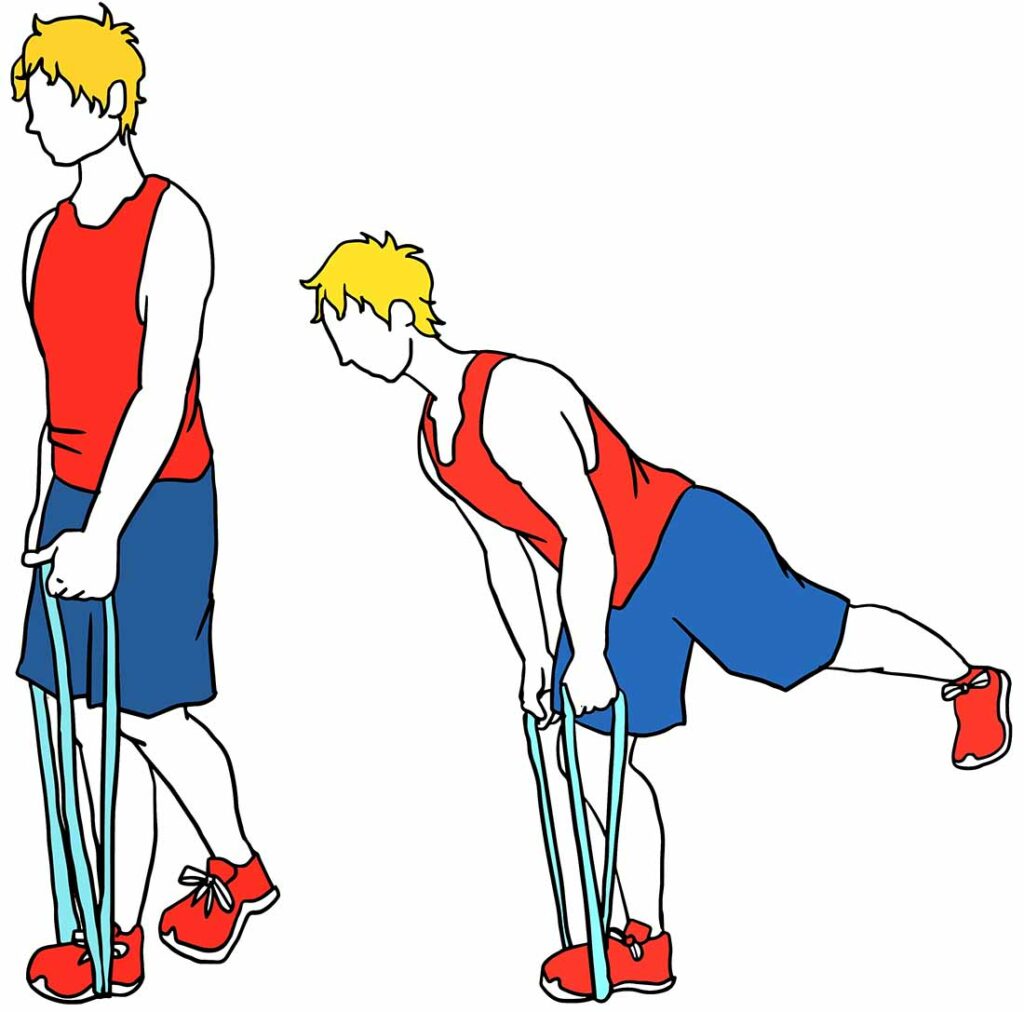 Step on the middle of the band with one foot and hold onto either end of the loop. Your front leg is slightly bent. Keeping your head, body and back leg in a straight line, lean forward until you are roughly horizontal. Try to keep your balance. Then return slowly to the standing position.

Get into a lunge position, standing on the middle of the band and holding onto each end. Using the strength of your front leg, push up until your leg is straight, then return slowly. Holding the band further down increases the difficulty. Keep your body in an upright posture throughout the movement and focus on only using your front leg muscles to stretch the band.

Keep your legs either straight or slightly bent during this movement. Stand on the middle of the band and bend down to hold either end of the loop. Keep your lower back slightly arched and your upper back in a natural posture. Stretch the band up as you straighten yourself into a standing position. Done properly, you should feel it in your hamstrings and lower back.

Start on hands and knees with the band looped around one foot and the other end under your hands. Keep your back slightly arched and look forward. Kick your foot back and up towards the ceiling. Hold for a moment in the final position before returning to start.

Secure one end of the band at a low point and lie on your front with the band looped around one foot. Curl your leg backwards, bringing your foot close to your bum as possible. Feel a strong contraction in your hamstring. Adjust the difficulty by lying either further forwards or backwards.