I can think of three reasons why using resistance bands for shoulders is a good idea.

Firstly, bands can be fixed at any point and they don’t rely on gravity, so resistance can be applied from any angle. This makes them excellent for targeting specific joints and muscles through many different degrees of rotation. For complex joints like shoulders, this is important for physiotherapy or for strengthening and stretching your rotator cuff and surrounding muscles.

Thirdly, using resistance bands for shoulders is far safer and gentler than using free weights. Shoulders, like knees, are very easy to injure. Using bands is a low-impact form of exercise and less likely to result in injury. And because of the way they strengthen and stabilize your joints, you’re more likely to stay injury-free in future.

You can read about the benefits of resistance band training in more detail here.

What are the best resistance bands for shoulders?

This depends on your goal. For physiotherapy, flat resistance bands (AKA physio bands) are the most common because they’re excellent for applying gentle resistance to rotation of the shoulder socket. Check out this physio band workout for some ideas on how to use them.

For strength training, I recommend using 208cm heavy duty resistance loops (pictured above). These are available in different resistance levels, from light to extremely heavy. And resistance loops can be grasped in many different ways, making it easy to replicate most of the movements you can do with dumbbells or a barbell.

Here are 12 of the best strength exercises using resistance bands for shoulders:

Stand inside one end of the loop, feet shoulder-width apart. Holding onto the other end, lift your arms straight in front of you up towards the ceiling. Do not shrug your shoulders during the movement.

Stand with your feet together in one end of the loop. Grab the other end and bring it up to your chest level with palms facing up. Keep a straight posture and look up slightly. Push upwards until your elbows are locked out, then return slowly to the starting position.

Loop the band around one foot and hold on to the other end. Keeping your body and arms straight, lift your arm out to the side until it’s at head height. Hold for a second and then lower slowly.

Hold the band with arms horizontally out in front of you. Keep your elbows unlocked and your posture upright. Pull the band apart as far as possible and hold for a moment, squeezing your shoulder blades together.

Stand on the centre of the band and grab hold of either end. Relax your arms. Shrug your shoulders as high as possible and hold for a second, feeling the contraction in your trapezius muscles. 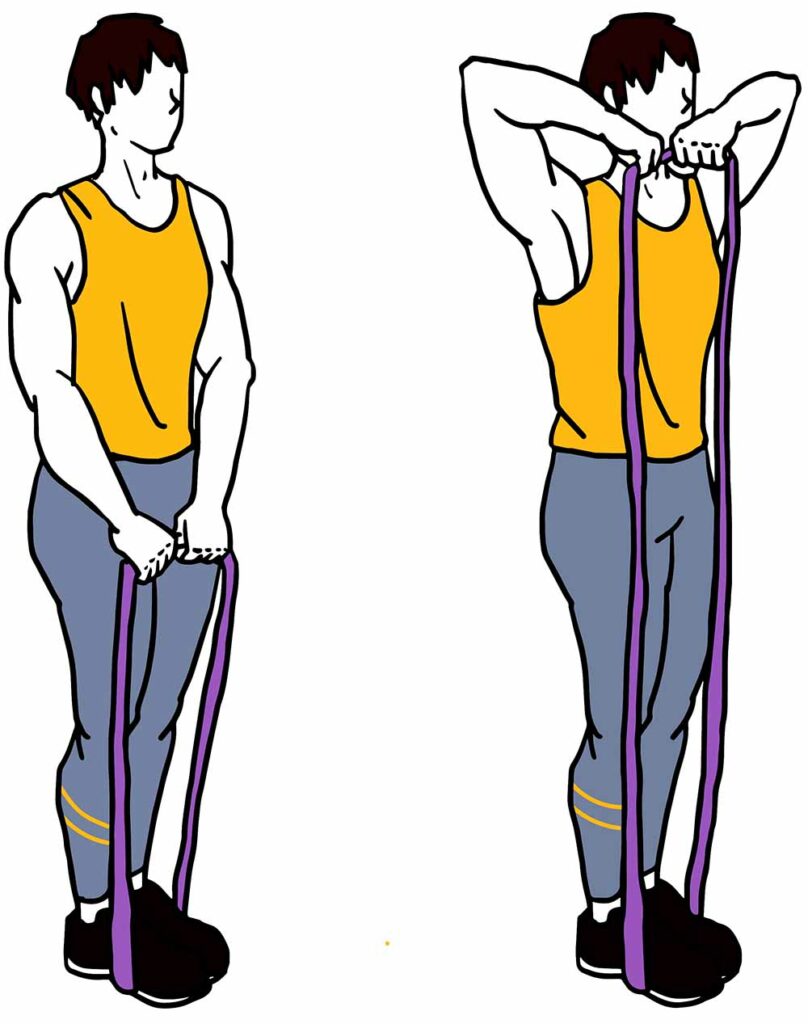 Stand in the loop with feet together and holding the other end in front of your waist. Pull the band up towards your face, lifting your elbows high. Keep a straight posture throughout the movement. Hold briefly in the final position.

Start on all fours with the band looped around your left foot and right hand. Keeping your back slightly arched, lift your hand and foot as high as possible, stretching the band taut underneath your body. Feel the contraction all along your back and hold before returning to the starting position. Repeat on both sides.

Stand on the centre of the band and grab either end, bending at the waist. Keep your lower back slightly arched and your head, neck and upper back in a straight line. Stretch the band upwards without bending your arms too much. Hold for a moment, squeezing your shoulder blades together. 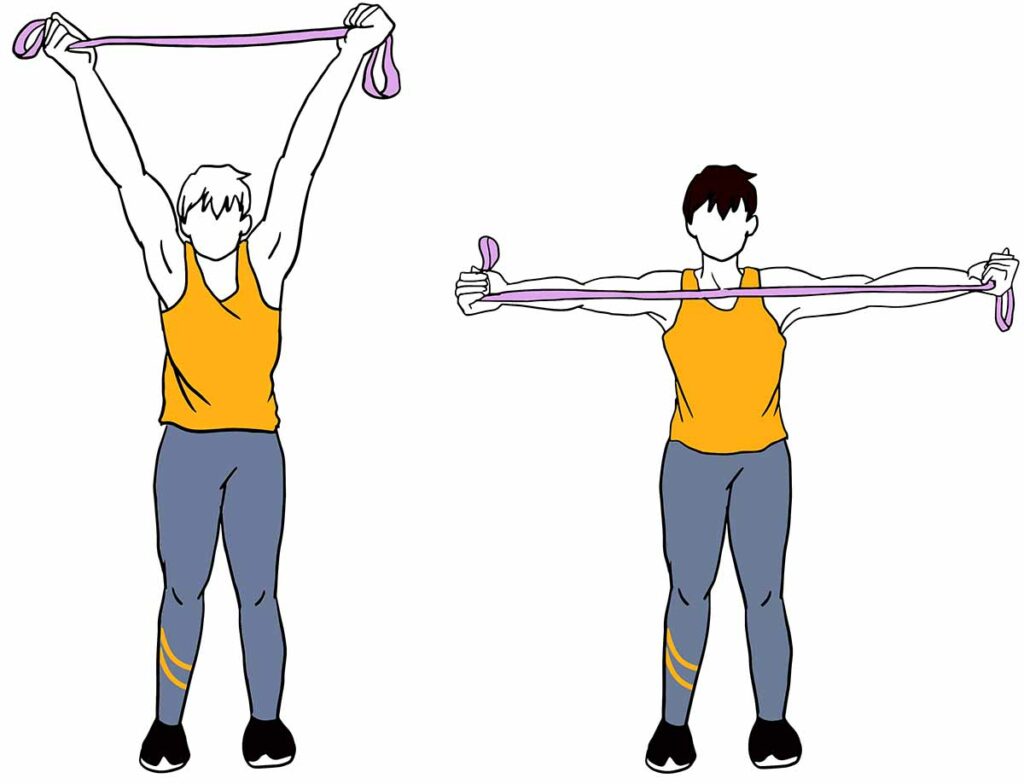 Hold the band up high above your head with your arms straight. Stretch the band apart by bringing your hands down to the side without bending your arms. Hold it for a second, pushing your arms out wide and feeling the contraction in your shoulders. 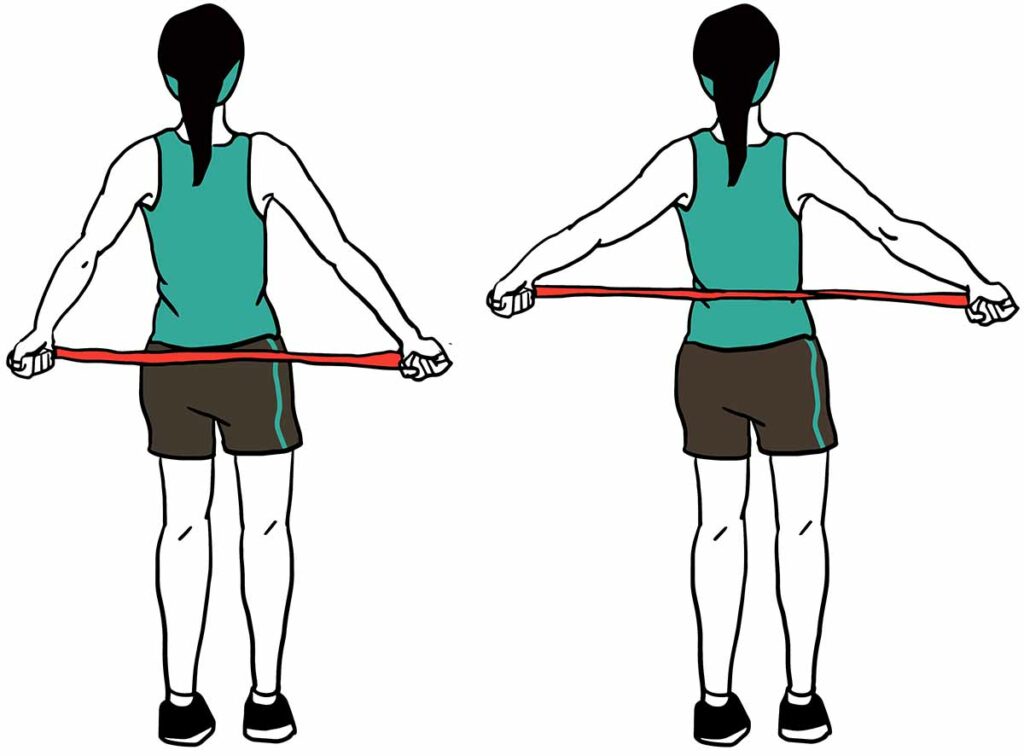 Hold the band behind you with arms straight. Stretch it as far apart as possible, keeping a upright posture and with your shoulder in a neutral position. Hold it, then slowly return to the starting position.

Stand with one end of the band looped around your front foot and holding the other end in front of you. Step forward into a deep lunge position, simultaneously lifting your arms straight up in front of you and stretching the band upwards. Be sure to keep your back straight during the movement.

Start in a squat position with the band looped around your feet and held at chest level. Drive up to a standing position, simultaneously pushing upwards until your arms are locked out. Hold it for a moment and then return slowly to the start.

Check out our full range of resistance bands for shoulders here. And keep an eye on our blog page for new workouts updated every week.